Ashley is a Dental Hygienist/Dental Assistant and Jason is a Carpenter and they now live in Park Rapids, MN. They met in Jason’s hometown of Breckenridge while Ashley was attending college. 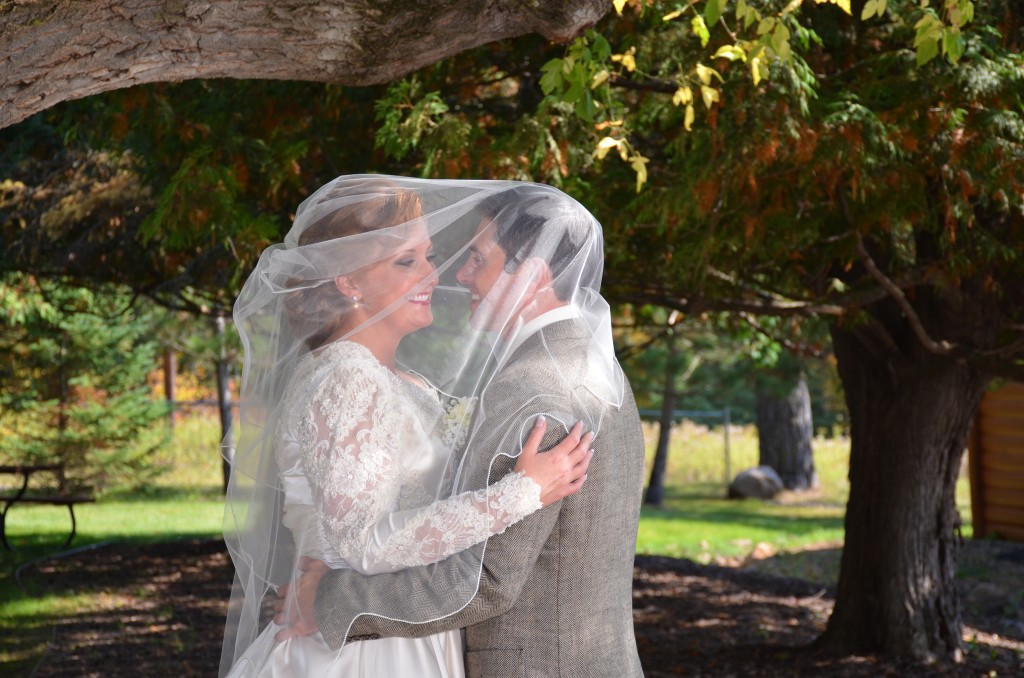 In April of 2012 they bought a house that was built in 1907. In December of 2011, the 104-year-old house had an electrical fire that was contained to the attic and was destined to either be burned for firemen training or demolished and sold as a building lot. They purchased the house with big dreams of restoration in mind. Together, they have been making those dreams a reality! 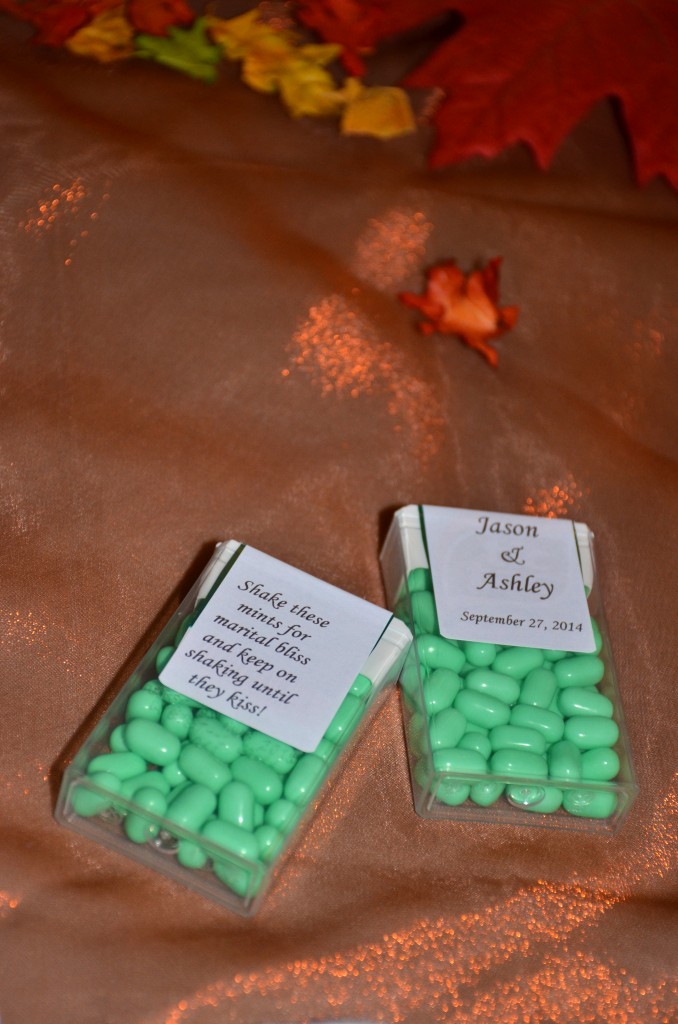 Ashley and Jason were engaged in December of 2012. They chose Pine Peaks as their destination wedding retreat knowing they could customize it and make it their own. Ashley has an amazing sense of color and style for decorating and Jason can build and make anything happen. Jason built the beautiful arbor on the site that the couple said “I DO” under as well as the custom chalkboard they used for a program. 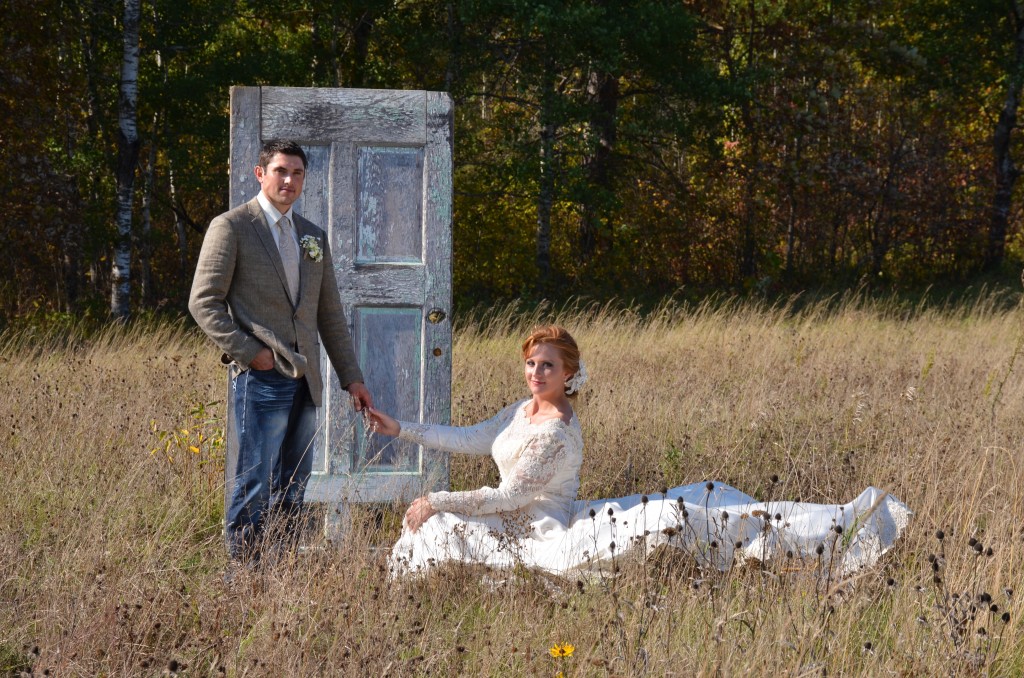 The backdrop to the head table was multiple doors that the couple had removed from their home and restored. The two parlor doors on the ends are from Julie’s homestead. This made a dramatic vintage background for the bridal party. 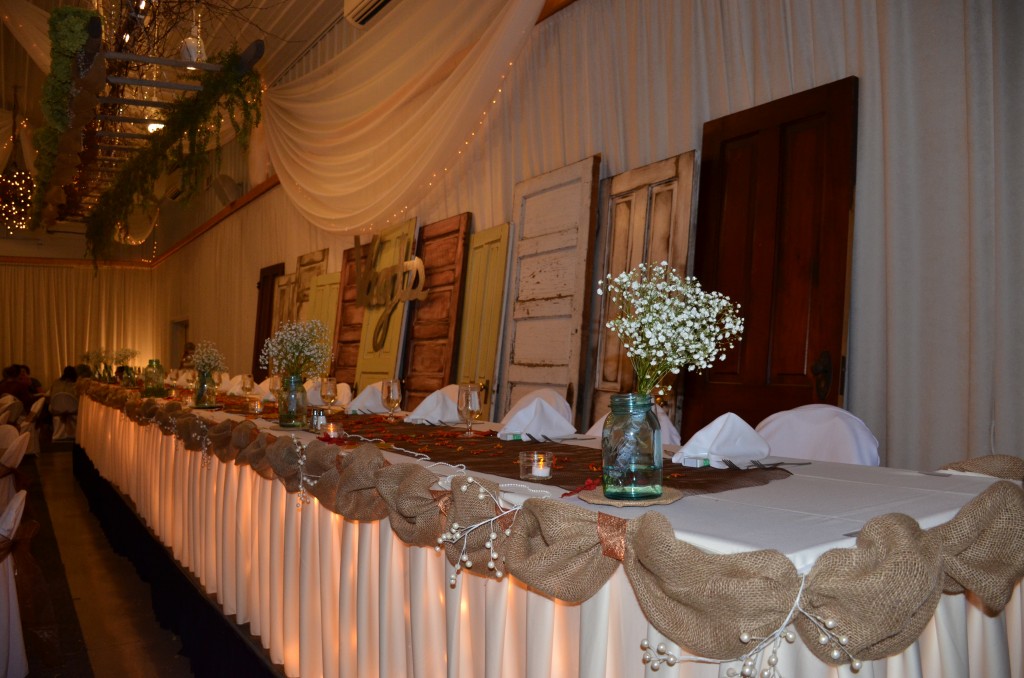 The bride used many of Pine Peak’s decorations; however came with a trailer load of her own to set the stage for their very own vintage wedding. The cut and dried hydrangeas and ball jars Ashley had painted made beautiful centerpieces in the dining room. They also customized the fireside room with photos, doors and other personalized the décor. 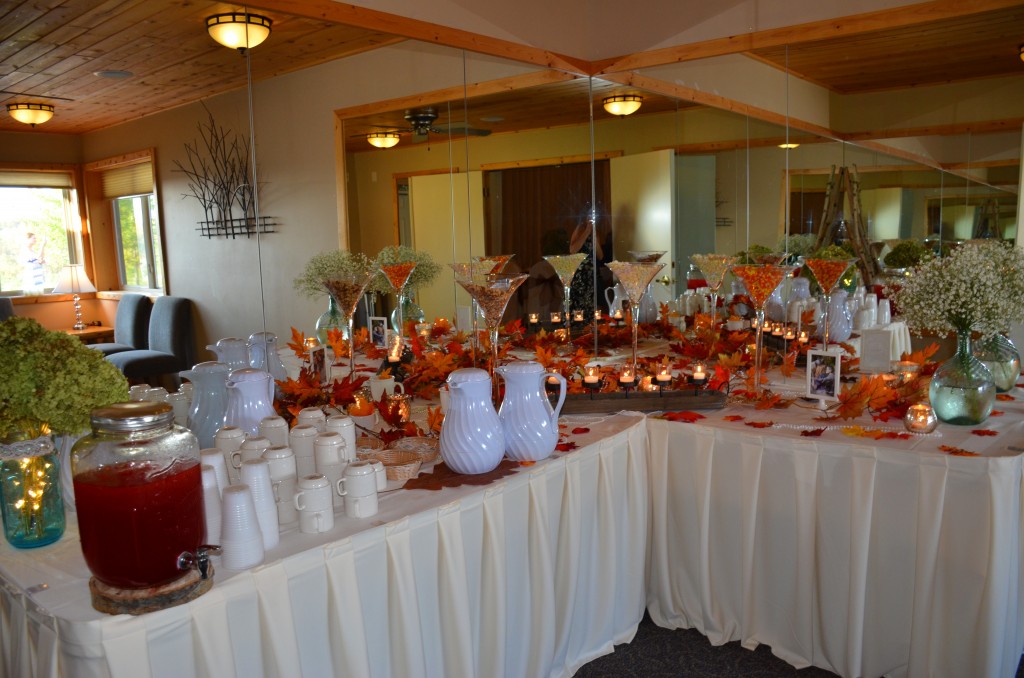 Saturday arrived and the whole bridal party got ready at the Retreat House. Ashley and Jason had their first look under Pine Peak’s oldest tree. Jason was so excited that he didn’t wait for Ashley to reach him and touch his shoulder. He just turned around to see his beautiful bride! 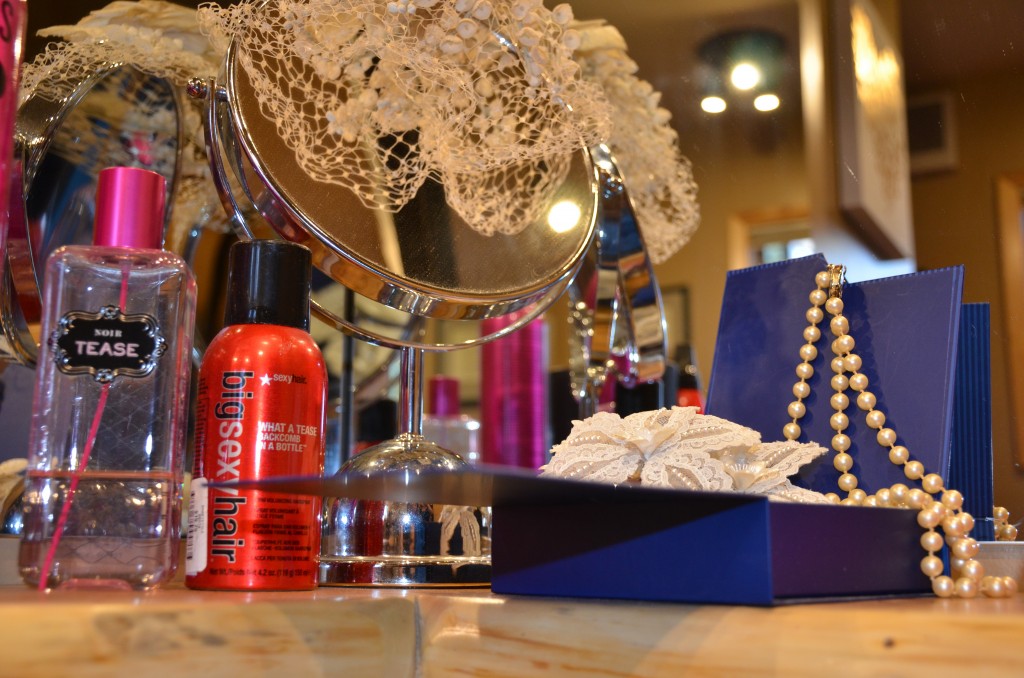 The September day was perfect with 80 degrees, a light wind and a blue sky with a scatter of puffy white clouds. The yellows and reds of Fall had arrived which made a magnificent backdrop for the event. 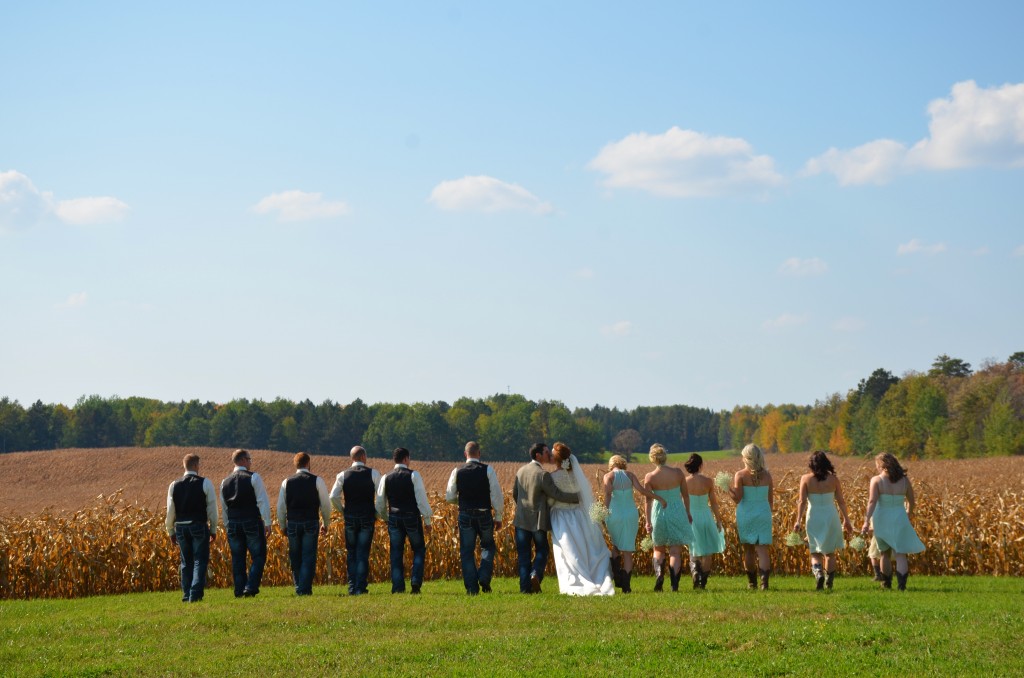 The couple wanted a variety of backdrops for their photos so they made use of Pine Peaks’ beautiful property and then took their photographers around Crosslake. One of the nearby locations included Dave and Julie’s lake home where they took amazing pictures at the gate as well as by the lake. Stunning intimate photos with just the bride and groom were taken while the wedding party remained at the Event Center and greeted the guests during the Social Hour. By the lake, Ashley’s dress became muddy when the photographer had her spin while dancing! Julie had the pleasure of scrubbing her gorgeous satin gown right in her lake home! 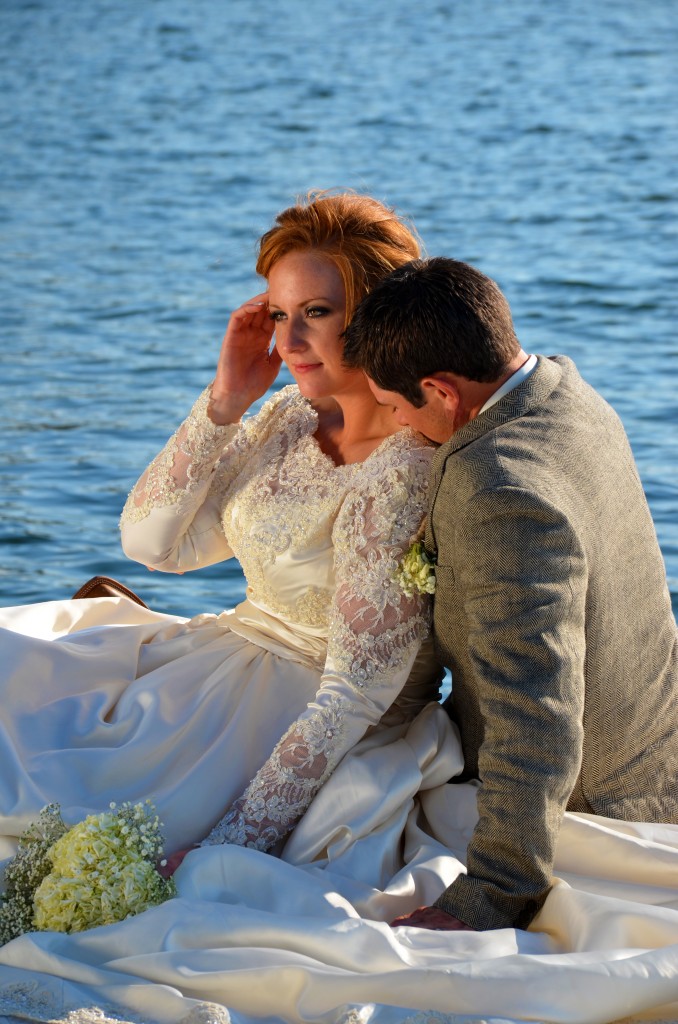 The 2:00 outdoor garden wedding was perfect! The many styles of mint green dresses the bridesmaids wore along with their cowboy boots were fabulous. The Groom and groomsmen were all “GQ” in their jeans and vest. A very classy, casual look. Ashley was escorted down the aisle by her father to her happy groom. Brian Keske, a family friend played guitar under the evergreens for the service. The couple said “I DO”! and then together sealed a Memory Box that Jason had made which was filled with love letters to each other as well as advice from others to be read at their first anniversary. They were introduced as husband and wife and the “Happily Ever After” began! 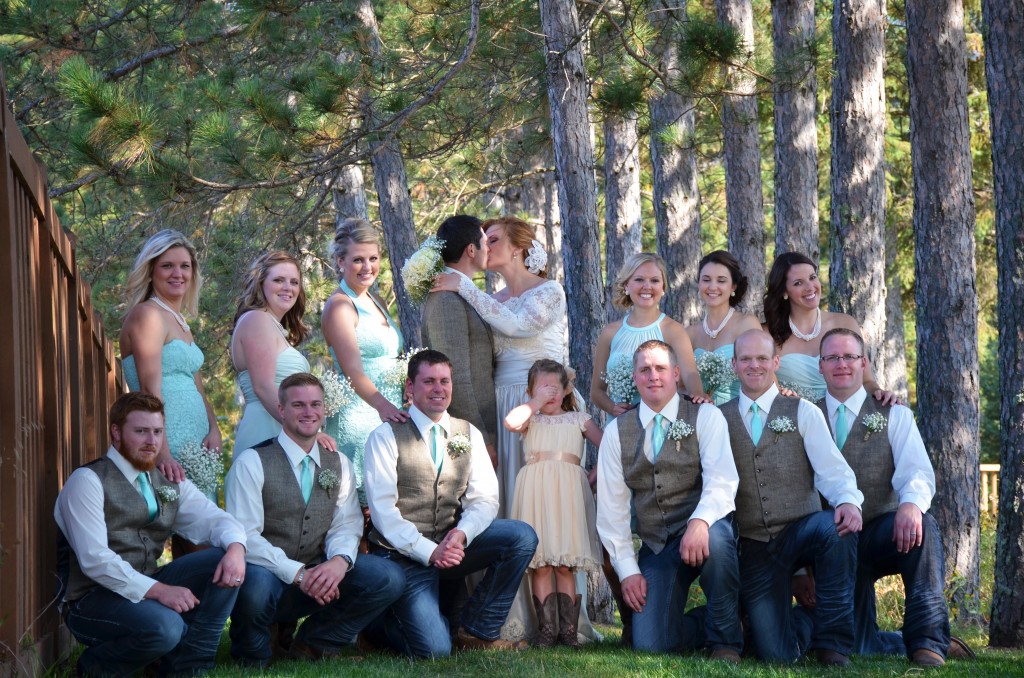 The reception started with Hor D’oeuvres for the guests served by Kate of Maucieri’s Catering. They enjoyed Rumaki, BBQ meatballs, and Antipasto. During the dinner, instead of the traditional clinking of glasses to have the newlyweds kiss, it sounded like percussion as the guests shook Tic Tacs!! (Nice touch Ashley!) The fabulous cake and cupcakes were made by Ashley’s cousin. They used Pine Peaks’ prep kitchen to put it all together and then staged it in a gorgeous cabinet that they later gave to the couple to use in their new house.

Chef Brian of Maucieri’s Catering was amazing with his Atlantic Salmon and Maple Leaf Chicken. The guests also enjoyed a Caesar Salad, Green Beans with Almonds on the side and Garlic Mashed Potatoes. The guests are still talking about this wonderful feast! Later in the fireside room, Kate made homemade pizzas in Pine Peaks very own Mugnaini Wood Fired oven. 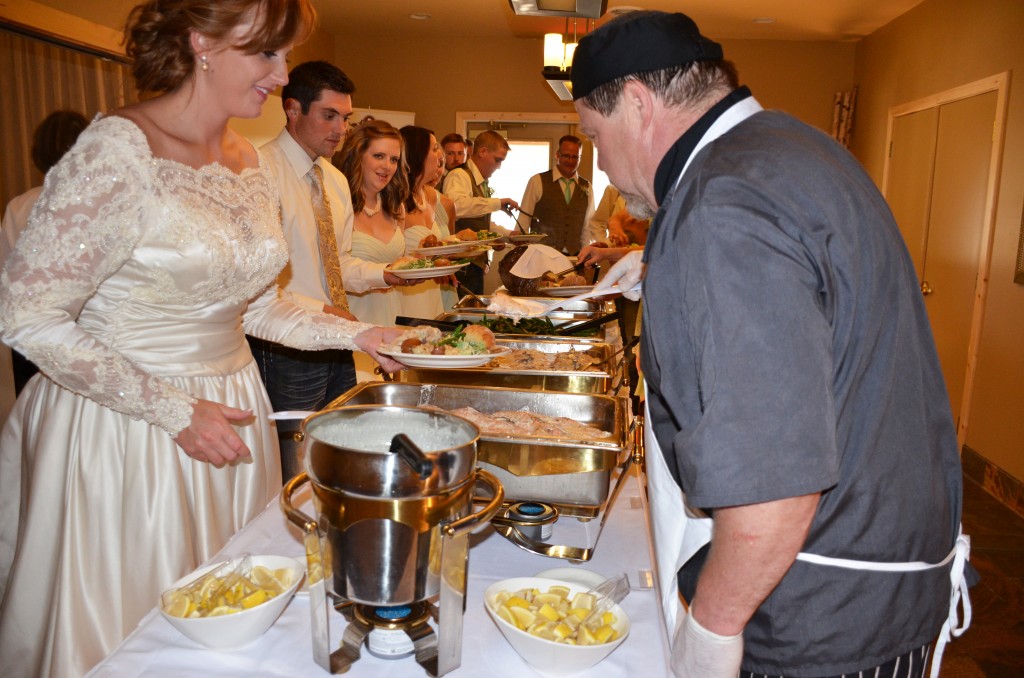 As the sun was setting on Pine Peaks, the photographer used a drone to video the couple in the garden where they had earlier said there vows. What a great way to capture the moment. The love between the couple is evident in the photos seen here that Julie was fortunate enough to take. 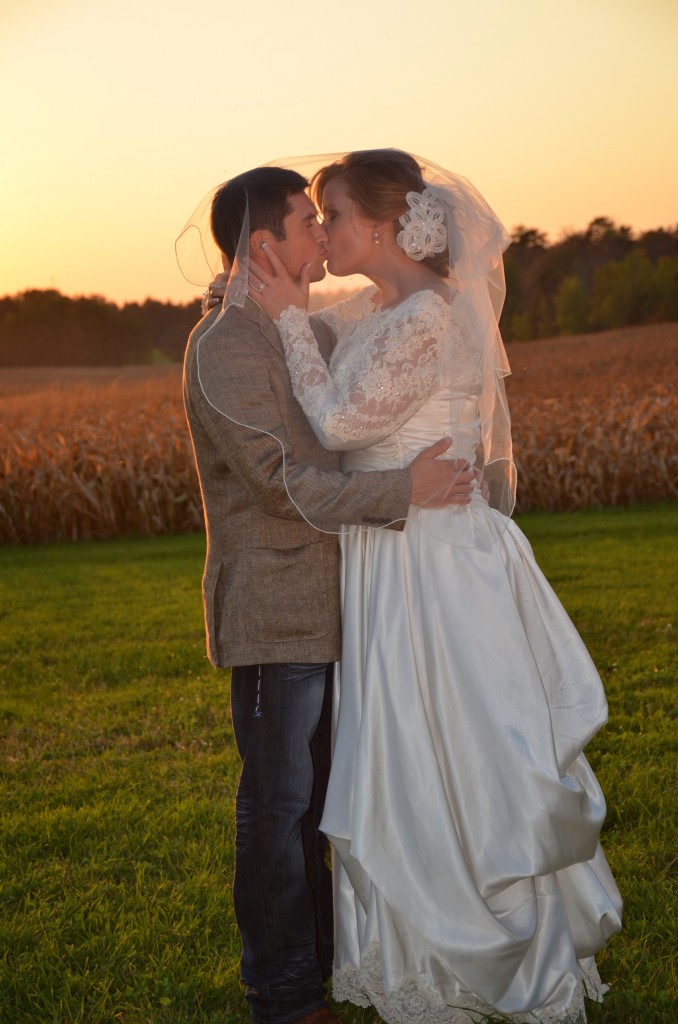 The couple has a beautiful one-year-old Golden Doodle named Jaxon who was on site to congratulate Ashley and Jason. He did great with photos! They also have a 6-year-old Quarter horse named Tanner who did not make the trip. The paint mare that was in the photo hanging above the fireplace was Ashley’s first horse no longer with the couple. 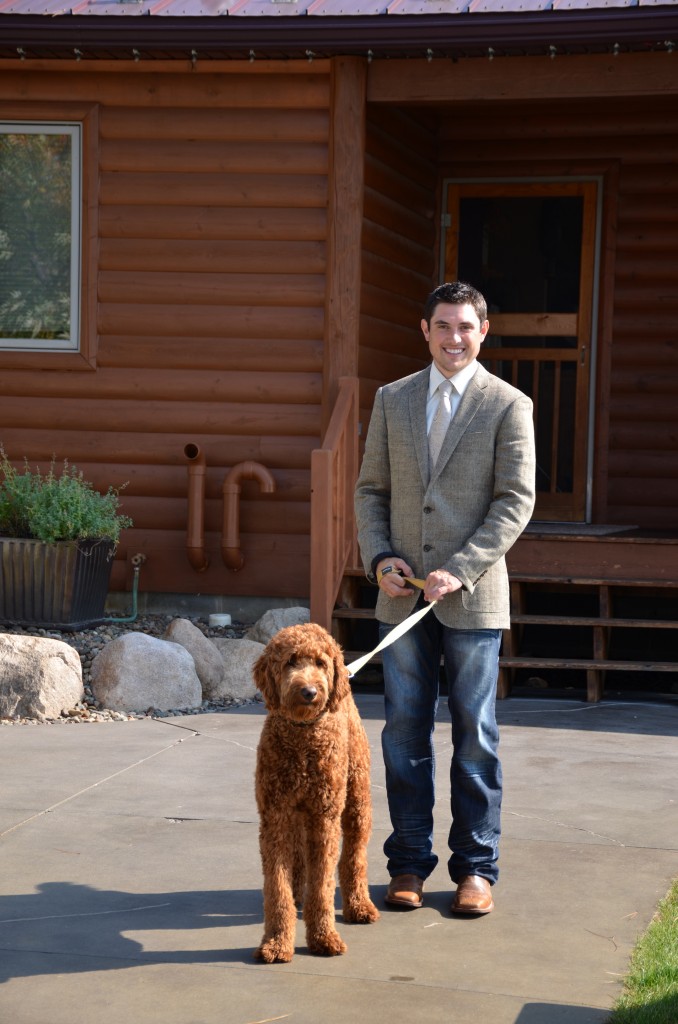 We, at Pine Peaks, were honored to host Ashley and Jason’s wedding weekend EXTRAVAGANZA! We wish you luck and love in your future together as you continue to build your home and lives as husband and wife. May Ashley’s keen sense of design and color always inspire the builder in Jason…and they lived happily ever after. 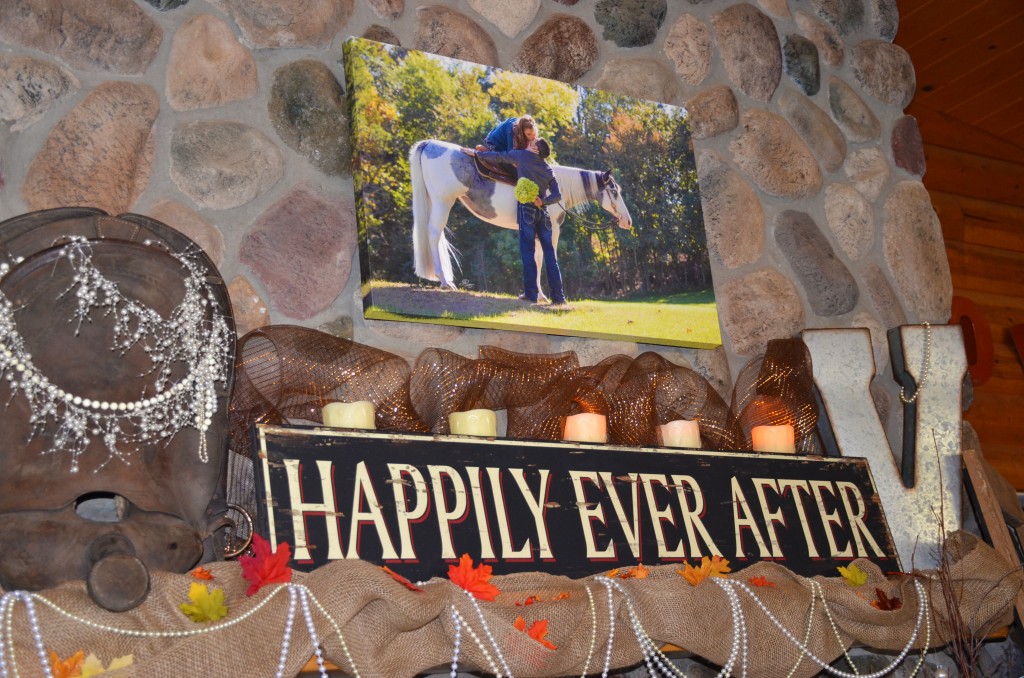