Tyler grew up in Burlington Ontario, Canada with his two brothers Ryan and Adam. An avid hockey fan and referee, Tyler chose to venture to the States to attend St. Cloud State University for Sports Management and History. Upon his arrival, he joined the Tau Kappa Epsilon Fraternity where he would meet many of his now close friends and his future wife. 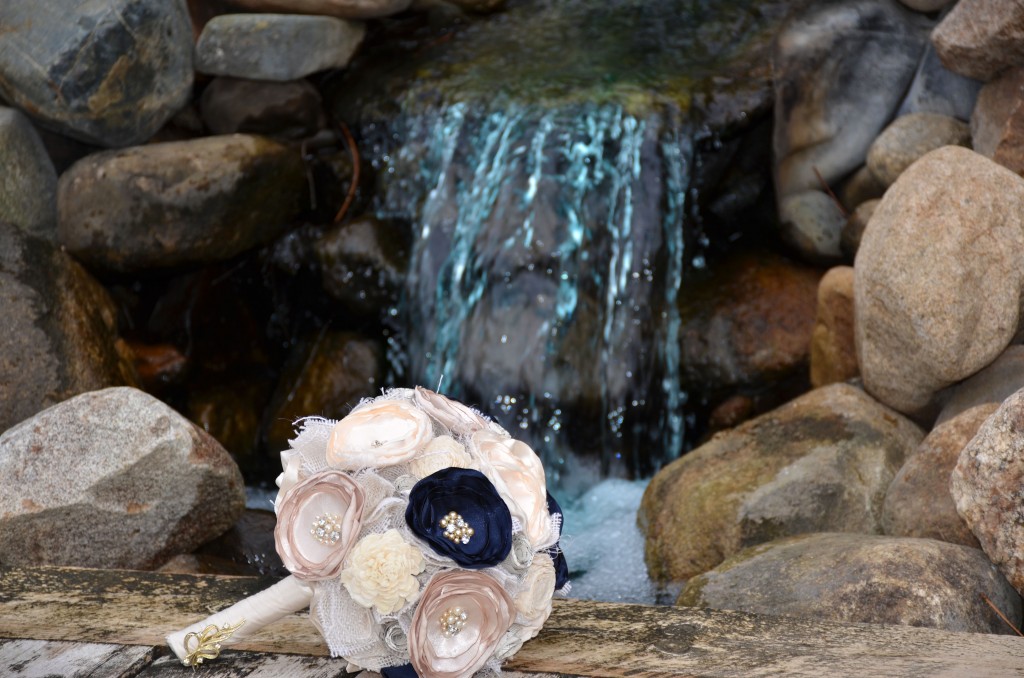 Kari grew up in St. Joseph, MN with her sister, Krista. She went to school at St Benedict’s for a year before transferring to St. Cloud State University for Film Studies and Creative Writing, where she honed her love of storybooks and film. There, she reconnected with an old friend who brought her out to meet some of his new fraternity brothers and her future husband. 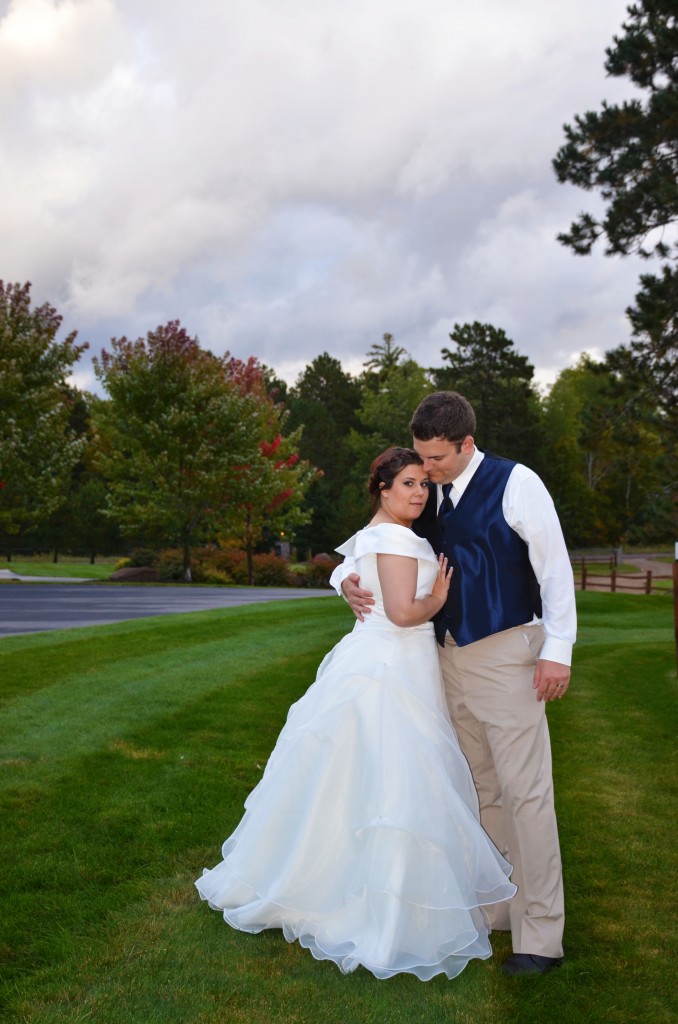 It was Wednesday, which usually meant Buffalo Wild Wings for the boys of TKE. That night, Kari’s friend Eric, a member of TKE, invited her to join them for wings. After a short while, a handsome stranger walked through the door. His dark hair and strut caught the eye of Kari immediately. She leaned over to Eric and said, “Please tell me he’s coming over here because I may have to marry that man.” Eric looked over, laughing, and said, “Yeah, that’s Canada, but you might have to fight for him!”

The boy known as Canada came right over and sat at Kari’s table, handing out greetings to his friends. Finally, she introduced herself. “Hi, I’m Kari.”
“Hey,” he replied, quietly. “Canada. Well, everyone calls me Canada.”
She smiled. “Does Canada have a real name?”
“Tyler Harrison.” 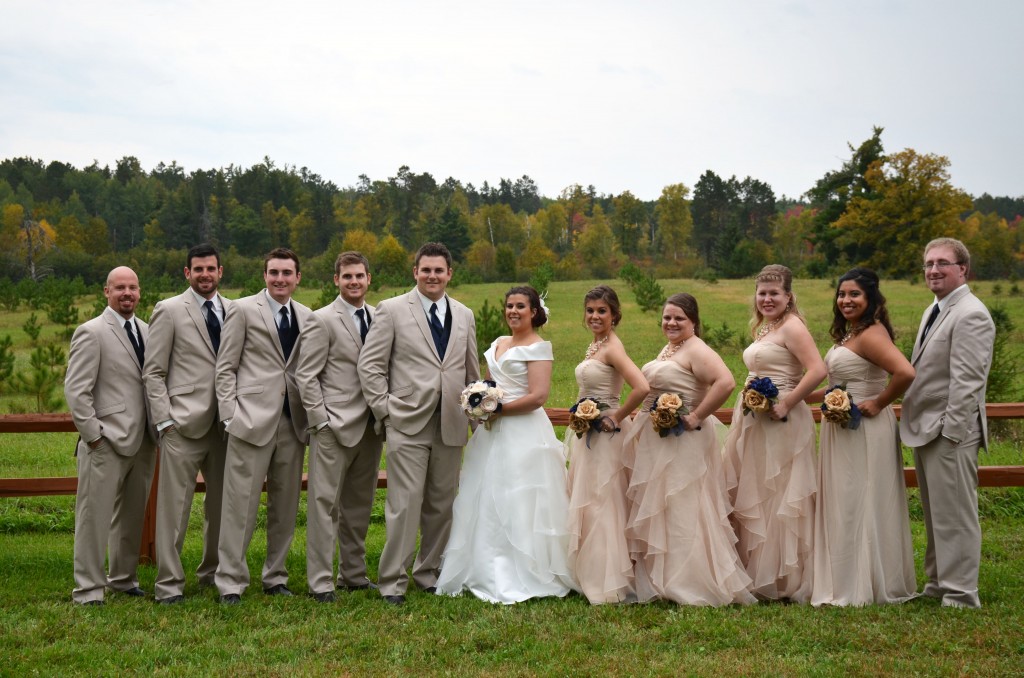 Two weeks later, Tyler skipped out on a party to see Kari again. They talked, danced, and he walked her and her friends back to campus. One week later, on October 15, 2007, he asked her to be his girlfriend.

On June 11, 2011, an 80’s themed party was thrown for Kari’s college graduation. About two hours into the party, Tyler brought in a large box. He made her open it right in the middle of the party. Inside the first box was another box. Then another. Then another and so on. 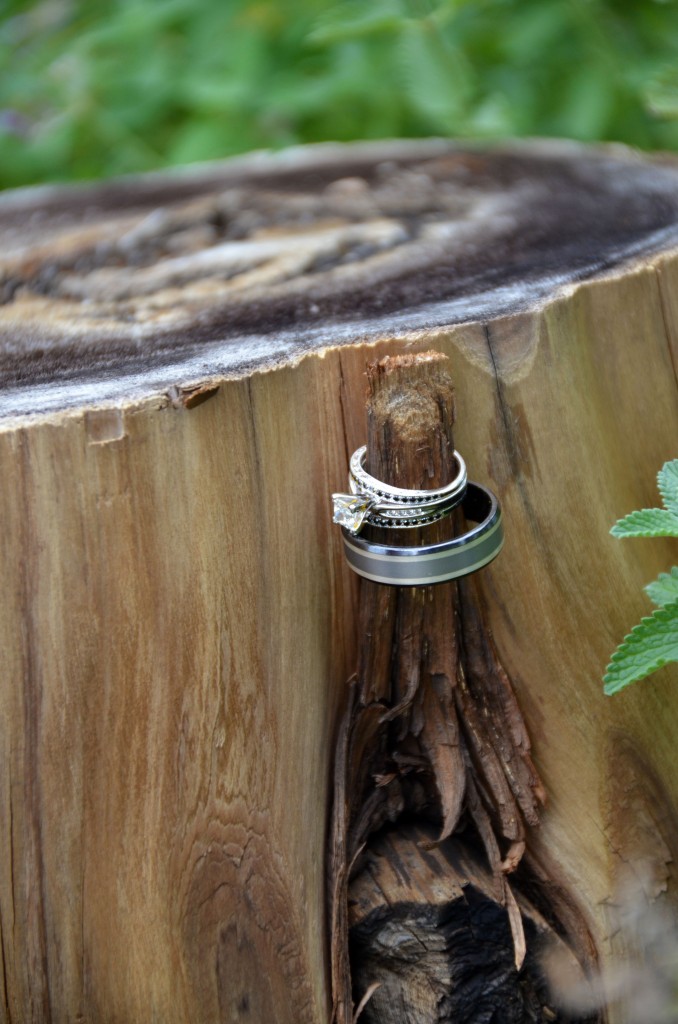 On each box, a line of a poem was written. On the last box, just a question mark was drawn. Then, on the inside of the box that held the ring, there was a note that said “Marry Me?” Of course she said YES!

Kari and Tyler chose Pine Peaks as a destination wedding venue nearly 2 ½ years ago and were thrilled with all of the additions and improvements that were made to the property since that time. A pavilion, prep kitchen and buffet area were added to the Event Center. The master suite in the Retreat House now had a Salon! 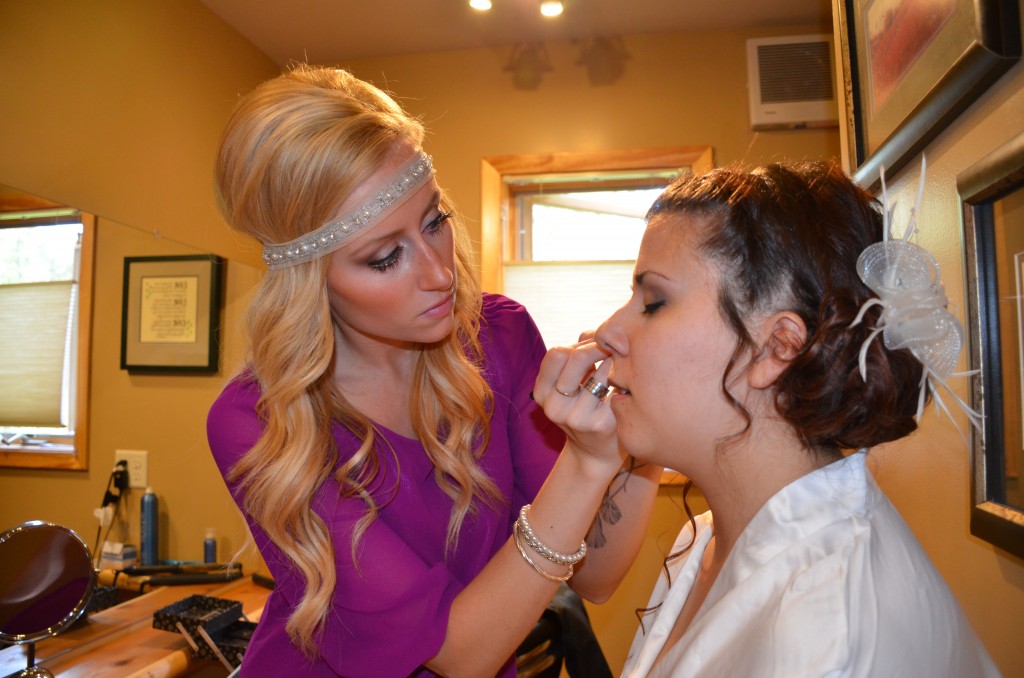 They fully enjoyed the entire Country Estate especially the use of the house which allowed their family and friends to come together for the whole weekend. They arrived early and used many of Julie’s collection of decorations to make the space their own. 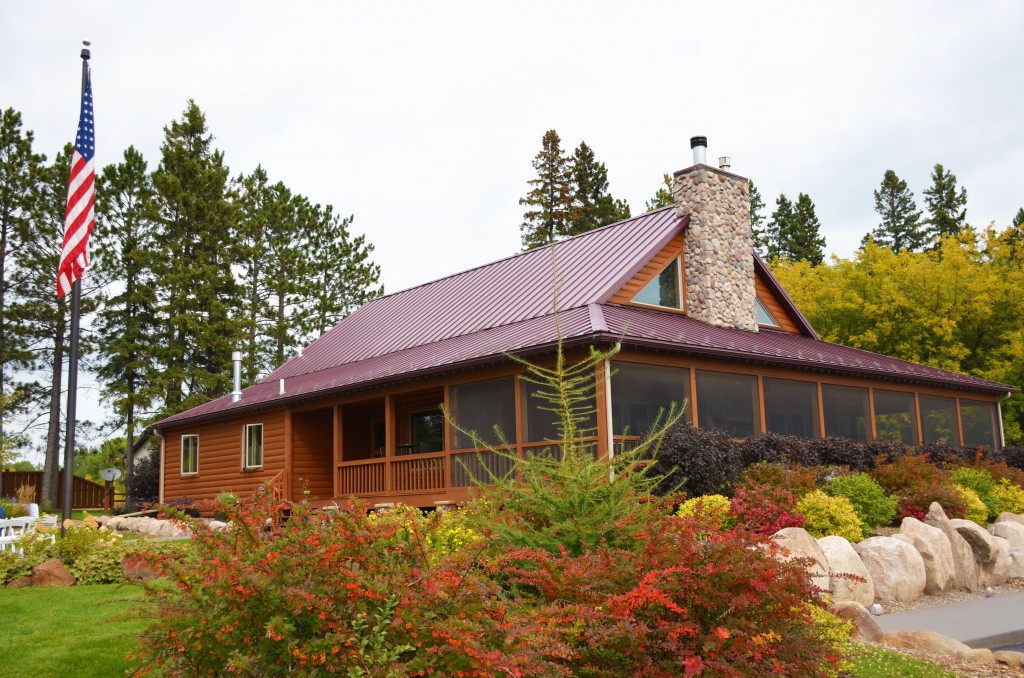 The rehearsal and Groom’s dinner were held on Friday night in the Pavilion. A gathering of family and friends from two countries broke bread and told stories of how they knew the couple. A fabulous feast was enjoyed.

On Saturday, the wedding was held in the garden before the rain blessed the couple with “good luck”. Tyler saw his bride for the first time that day as she walked down the aisle all smiles escorted by her father. They recited their own vows of commitment and then excitedly said, “I DO!”

Very quick outside photos were taken prior to the skies “blessings” and the party began! Fabulous appetizers were served in the Fireside Room by Maucieri’s Catering. The guests enjoyed Italian sausage with cheese on rye, fresh made bruschetta and deviled eggs. 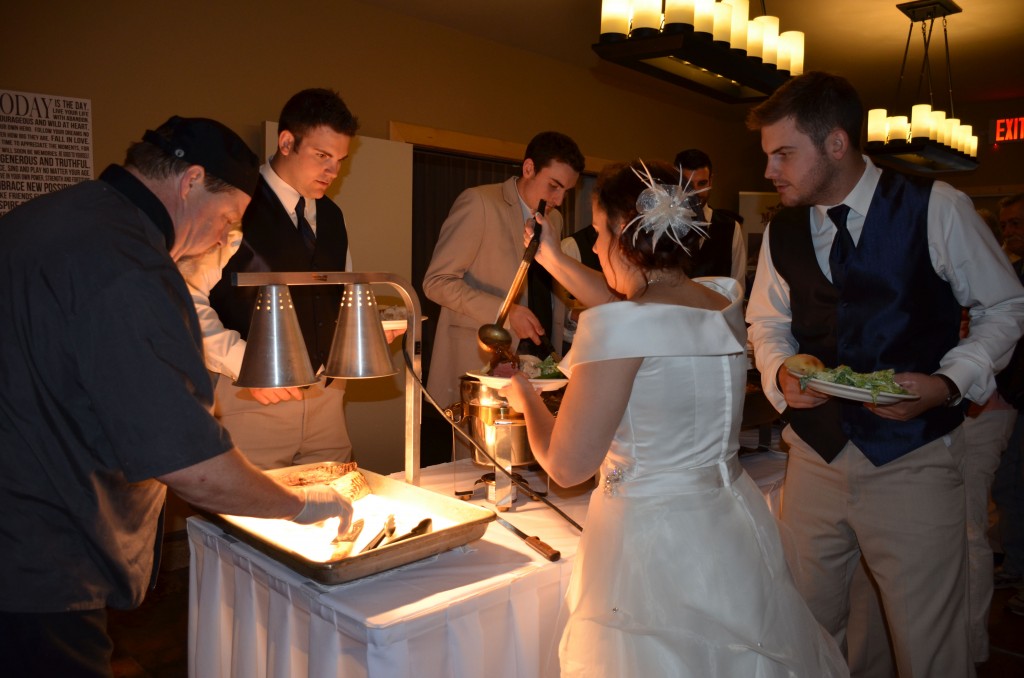 The Grand March was held as the bridal party was introduced to the crowd in the dining room. The guests of honor where then introduced as the newly married Kari and Tyler! They shared their first dance together as husband and wife in front of the whole crowd. 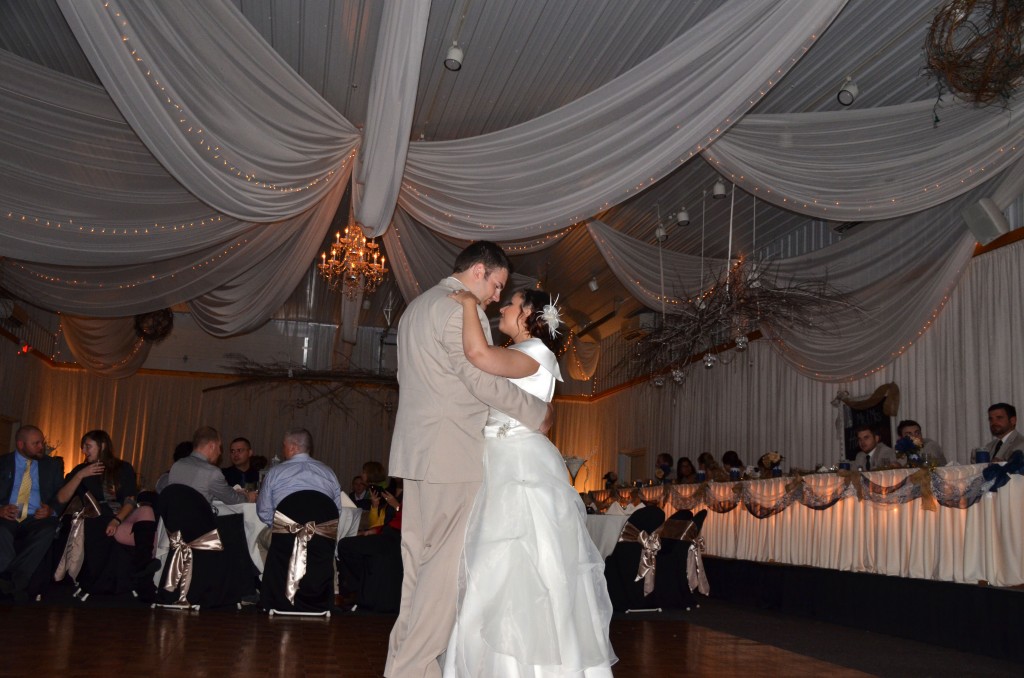 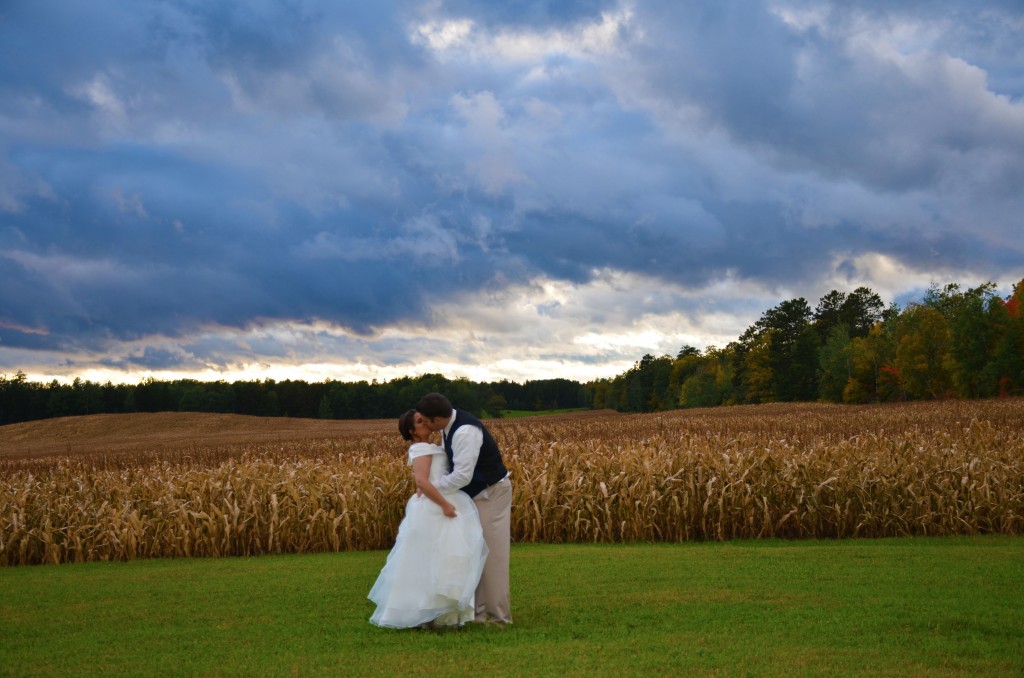 The evening cleared up and a happy couple walked into the sunset! The celebration continued with dancing and fun. Beth of Maucieri’s Catering later served a Pine Peak’s tradition of fresh pizzas in the wood fired oven. 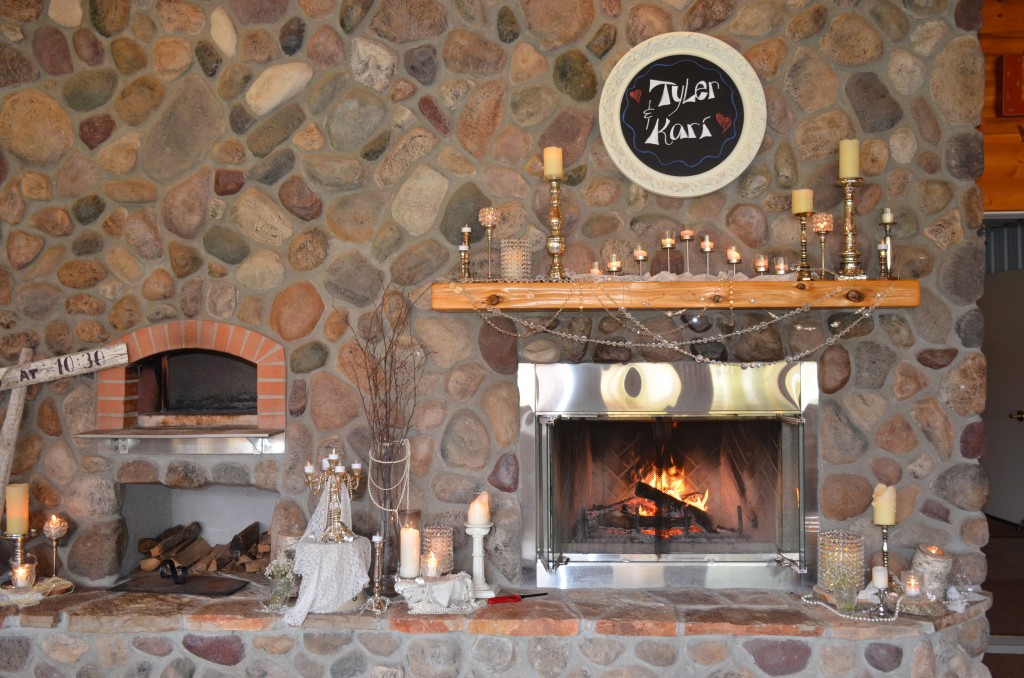 We were truly honored to host the wedding celebration of Kari and Tyler and wish them a fairy tale life of luck and love! Stay true!
– Dave and Julie Peterson