Natalie and Cody met during Geometry class in ninth grade. At the time, they were both dating other people, but developed a casual friendship over the years in high school. It wasn’t until their senior year when Cody and Natalie became really close. She had just broken up with a serious boyfriend over the summer and he was struggling in his serious relationship with his girlfriend. For whatever reason, they spent hours during a group get-together talking about these broken relationships. They continued this honest conversation over the phone and then in person until they found every reason to be together. 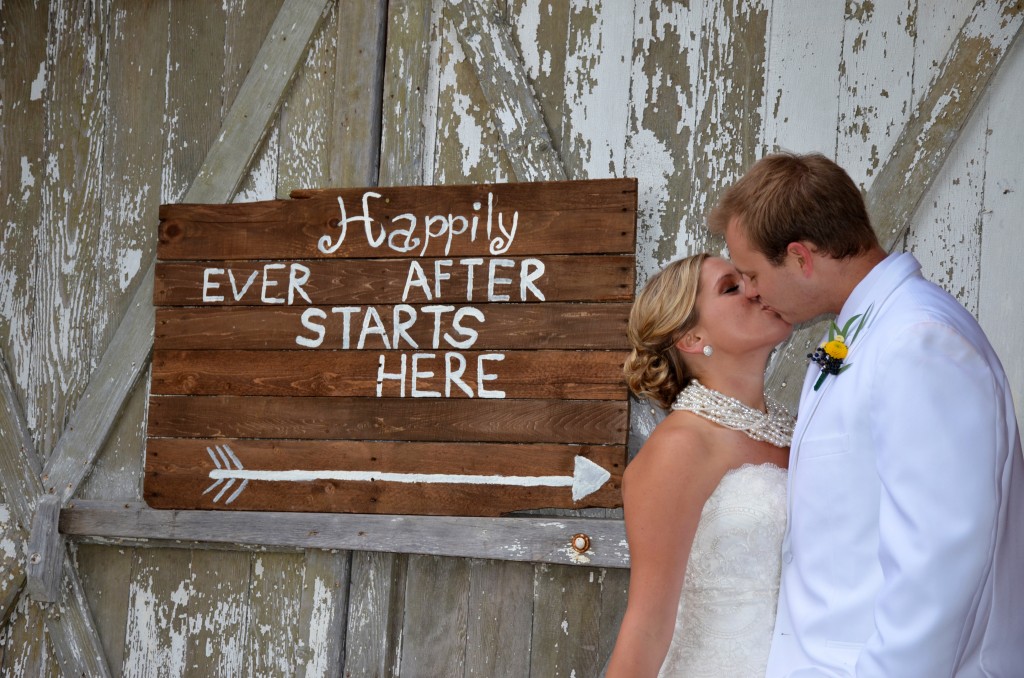 Natalie and Cody planned to end their relationship when they left for college since he was going to Houghton, MI and she would stay in the Twin Cities. It wasn’t easy, but they maintained a long distance relationship. In total, they spent 2 ½ years seeing each other from weekend to weekend. Looking back at their relationship they have no doubt it was God’s will and strength that got them to where they are now. They are so excited to finally be together! 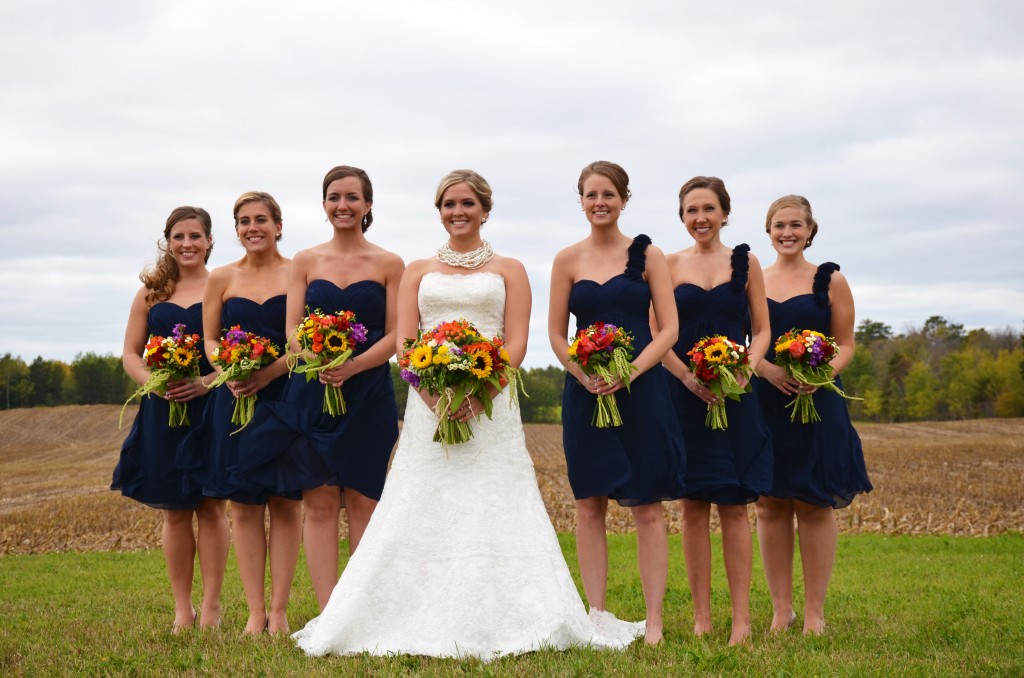 The weekend had finally arrived! They were getting married at Pine Peaks Event Center!  Friday morning was chilly and the first dusting of snow was there to tease us all. The final touches were made using the decorations provided by Pine Peaks and the many brides before that “paid it forward” and left decorations for others to use. Their theme was romantic and rustic; the bride had a great sense of style putting it all together. 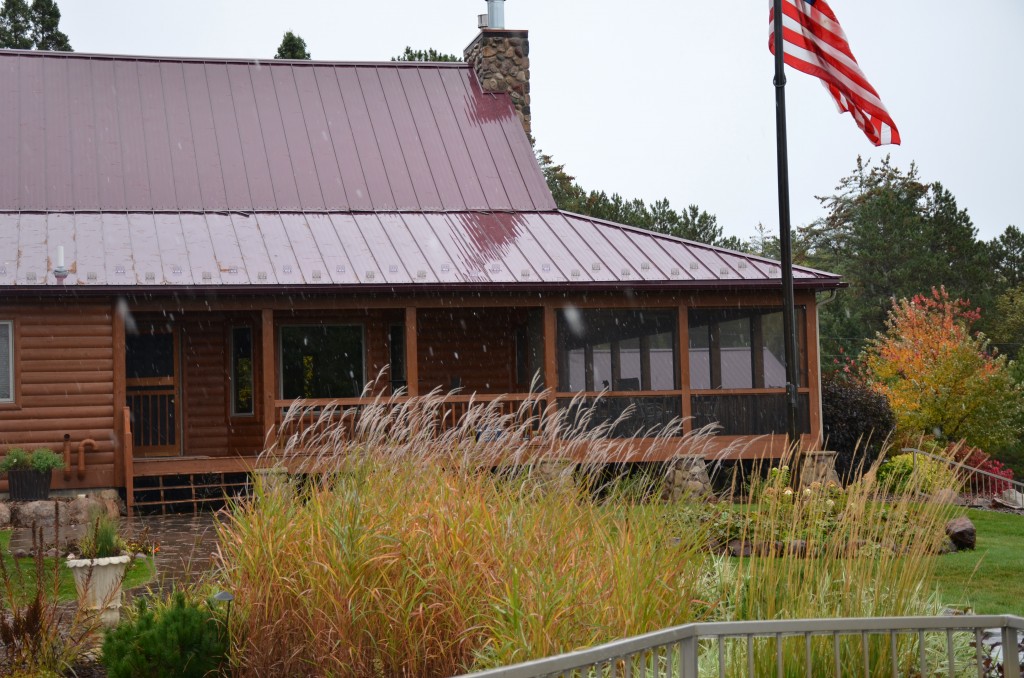 Friday night, the rehearsal and Groom’s Dinner were held with family and friends coming together for fellowship and to share stories of the couple. The night was amazing finishing with a sauna in the back yard. 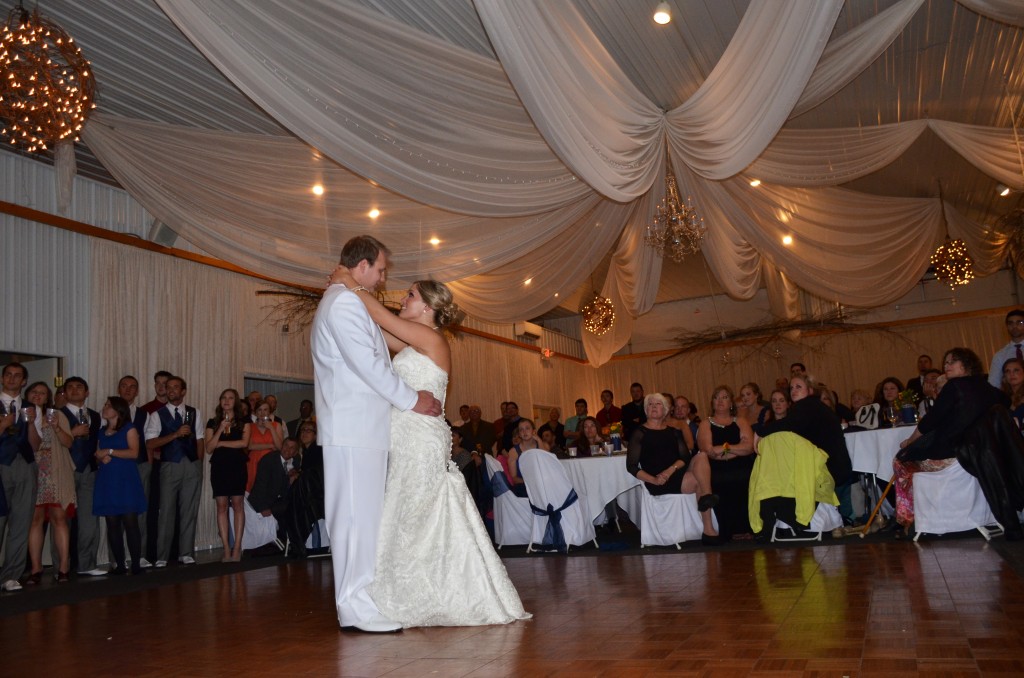 Saturday arrived and it was time to say “I DO”! Cody did not see his beautiful bride until 3:00 as she was walked down the aisle escorted by her father for the beautiful garden wedding. He was in all WHITE and full of emotion as she walked toward him. During the lighting of the Unity Candle, Natalie’s father sang a beautiful song to the couple. There were no dry eyes in the crowd. They said their vows and were announced husband and wife! 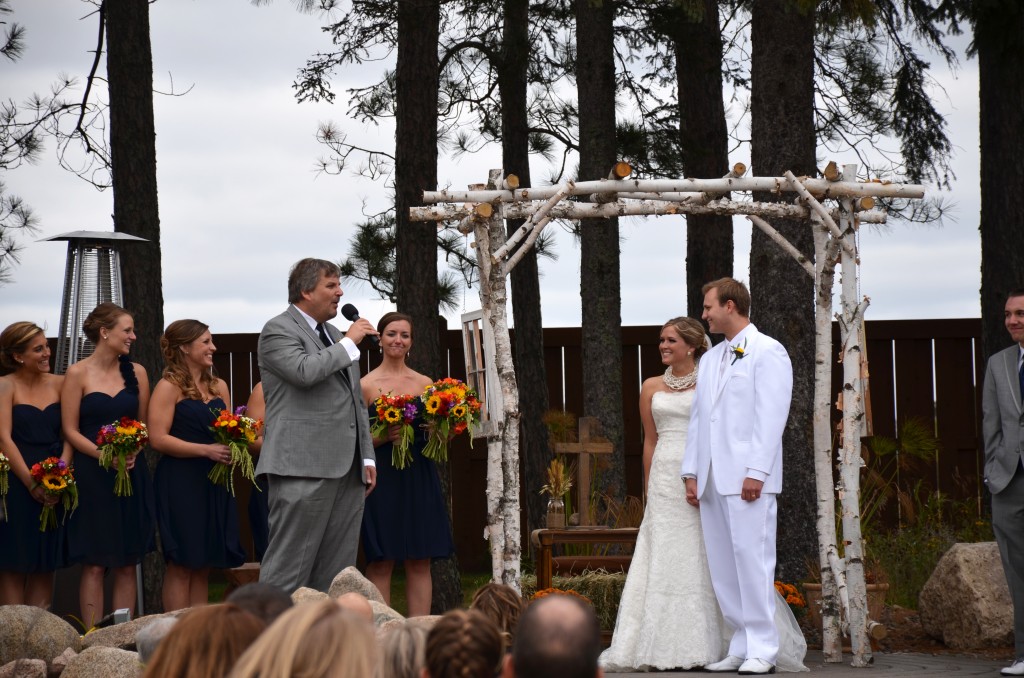 The guests were warmed by the roaring fire in the fireside room after the ceremony where Wes from Maucieri’s was waiting to start the celebration.  Bruschetta and cream puffs with olive cream cheese were served by Kate of Maucieri’s Catering as appetizers. The Grand March with Deandre of Premier Entertainment announcing the wedding party got the party started! 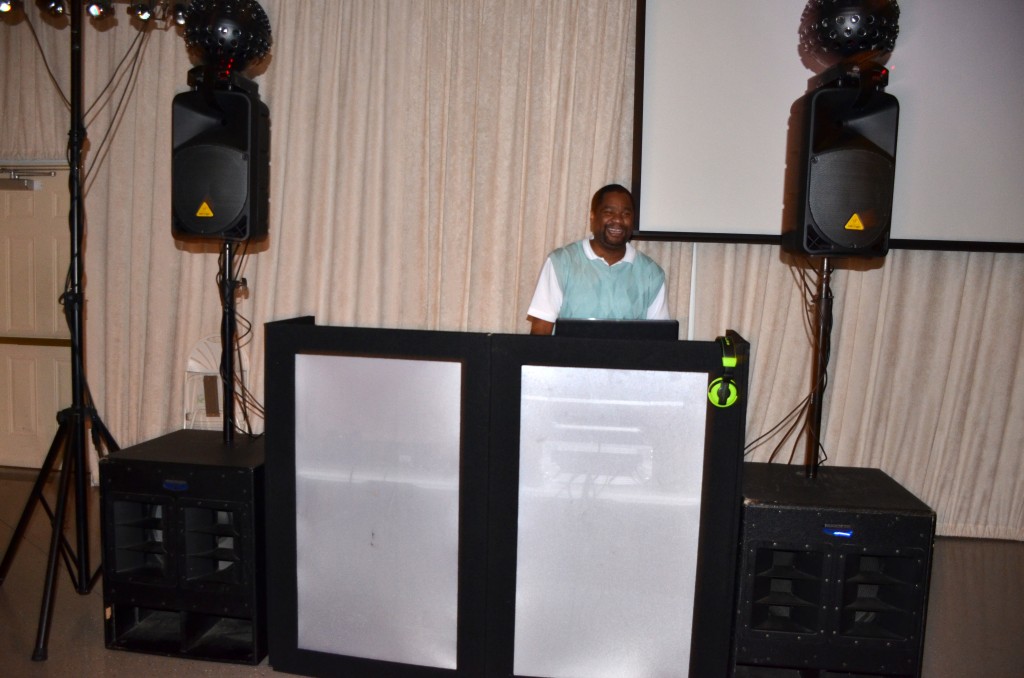 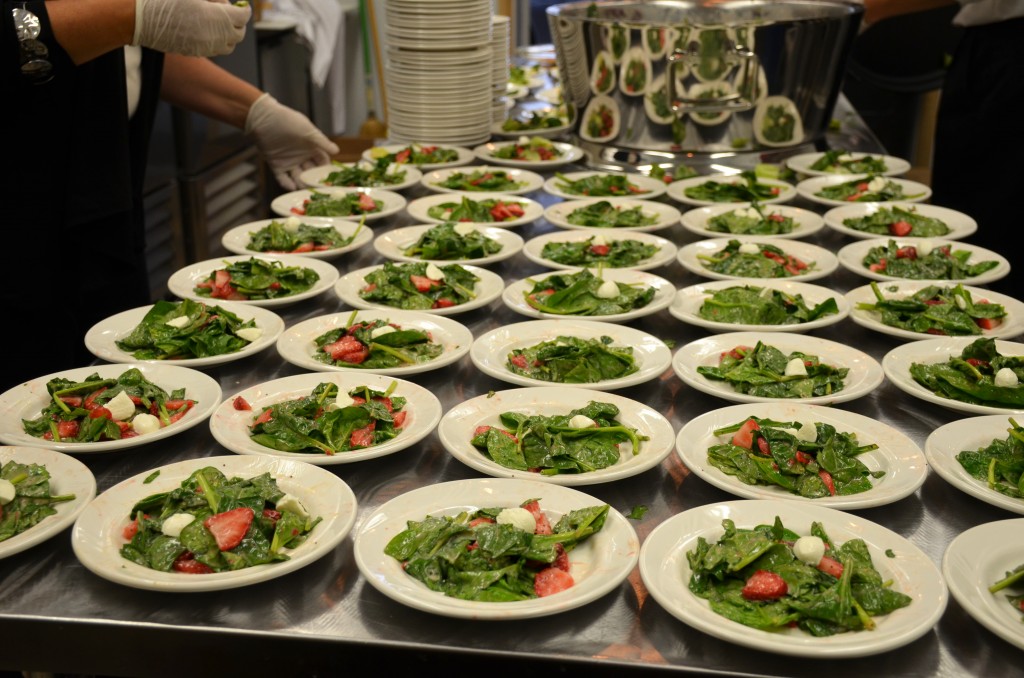 The guests were treated to cupcakes made by Reed’s of Crosslake and then they danced the night away with Deandre of Premier Entertainment leading the show. Later in the evening Kate of Maucieri’s Catering made fresh baked pizzas in Pine Peaks’ own Mugnaini Wood Fired Oven. 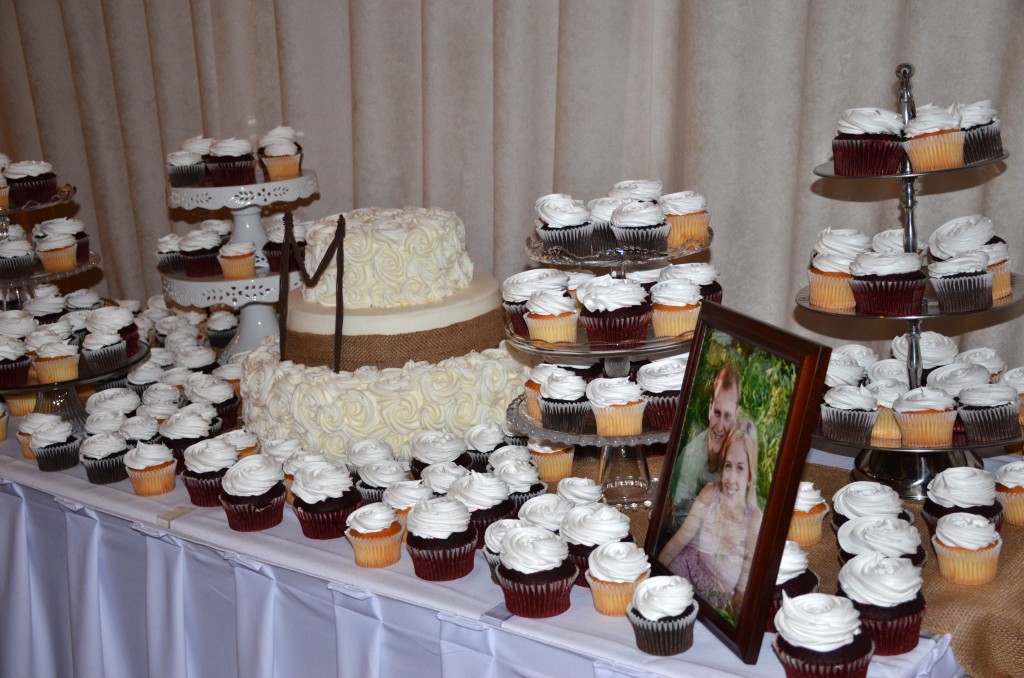 We, at Pine Peaks, wish these high school sweethearts the best of luck and love in their journey as husband and wife. Be Happy and enjoy the ride! 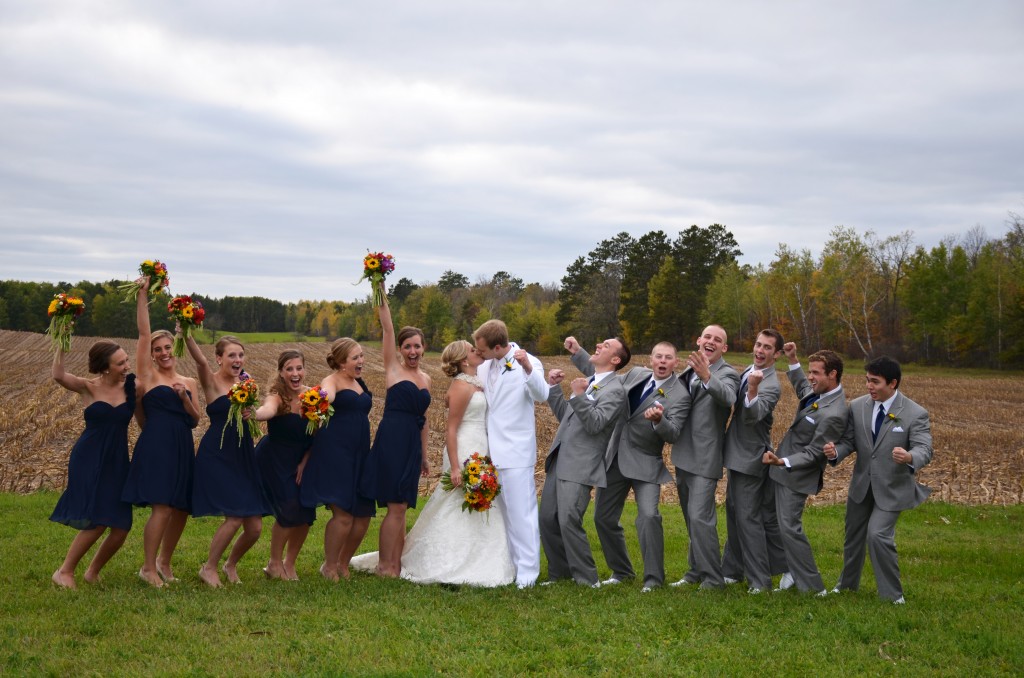 View the rest of the couple’s Wedding Photo Album here.